“AM Radio and rock ‘n roll … it was like a thread that ran through my life.”        – Mare Winningham to Paul Simon in One Trick Pony

When I heard this line it jumped out of the movie screen and etched a permanent groove in my mind as I realized how true this was for me too. Music, and especially song lyrics, were much more than a thread, however. Music shaped my thoughts and attitudes at least as much as school, parental influence, and peer pressure as I was growing up. My connection to music, and being deeply moved by it, must have started in infancy, though my recollections don’t go back quite that far. 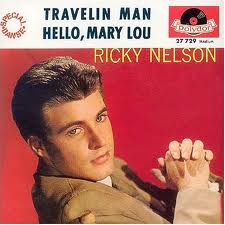 I wasn’t quite ten years old when I became obsessed with Ricky Nelson. How I longed to be the girl he wrote “Hello Mary Lou, goodbye heart“ for. I was a few years away from female hormones turning me into a boy-crazy teeny-bopper. Ricky was awfully damn cute, but without the guitar and the silky-smooth voice, I think at nine I might not have noticed. He crooned love songs with such ease they had a hypnotic effect on me. I was falling in love with love long before I had a clue about ‘the birds and the bees.’

Ricky Nelson wasn’t the first to introduce me to the romance of romance. I had earlier influences, especially from films like “The Sound of Music” and “My Fair Lady.” But the heroines and their leading men in those films belonged to another time and place. Ricky was now (back in the ’50s). He was a romantic hero for a modern maiden. 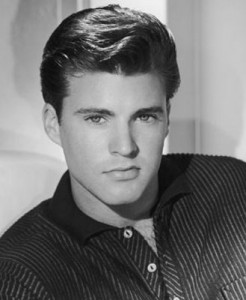 Is it possible that the fight between my desire for adventure versus the urge to find my one true love was triggered by the conflicting themes of two of Ricky’s most famous hits?

Of course I know they were merely songs, for the purpose of entertaining. Yet at nine years old my young brain absorbed the opposing themes of the lyrics: In “Hello Mary Lou” Nelson’s heart can belong to only one; then he sings in “Travelin’ Man” of having a different honey in every corner of the globe. (BTW, how can the globe have corners when it’s round?)

I was well-conditioned, perhaps hard-wired, to be monogamous. Yet, Ricky made ‘sleeping around’ a new kind of romantic fantasy, and the budding sexual revolution of the times opened up the playing field for women too.

When Ricky sang to Mary Lou, there was no one else I wanted to be. But what was I thinking when I heard Travelin’ Man? Did I dream of being one of his special-for-the-moment global squeezes? Or did I start to fantasize about being the one in the power position, the bee that flew happily from flower to flower?

I’m not sure what my tender mind was thinking, but I do remember a nagging frustration that my brother,  just one year older than me, always seemed to have more privileges. And I began to question, ‘Why can’t a girl do anything a boy can?’

Why couldn’t I be a “Travelin’ Girl” someday and have a different boy in every curve of the globe? – Eve