We were allegedly in school to learn, but the thing my fellow sixth-graders and I wanted more than smarts was to be cool. It was 1964. Music was the magic link that would connect us to the ‘in crowd.’ You had to stay up-to-date with the most popular tunes if you didn’t want to be labeled ‘a square.’

Teachers played tug-of-war with our attention as we fidgeted and watched the clock, counting the minutes ’til recess. At the sound of the bell we raced out to the far end of the asphalt playground and jockeyed to get a ringside spot at the seesaws. That’s where we’d gather every day at two o’clock, hovering around Bobby C’s portable radio. It was tuned to WABC radio, New York’s premier rock ‘n roll station. Every day at 2:00 they would play the current #1 song. If you didn’t know what WABC’s #1 song was, you’d be on the fast track to social oblivion. All the cool kids knew, and liked, the #1 song.

One week it was Be My Baby by The Ronettes. Motown ruled. Kids were either Greasers or Preppies. It wasn’t unlike “Happy Days.” Whatever clique we might be part of, the music permeated our soft young psyches flavoring the atmosphere with songs of teenage romance.

No matter if you wore leather or madras the paradigm was the same: eventually we would pair off, marry, and raise families. There weren’t many other options apparent to us. The world felt well-defined and fairly safe, except for the ‘duck and cover’ thing.

So we listened to Be My Baby and felt secure in our coolness as we sang along around the seesaws. Then, as sudden as a flash flood it all changed. The very next week a new band, with a new sound, was making waves that would ripple out through decades. The sound washed over us creating a buzz and excitement we’d never felt before. The song was simple, but it had a driving, pulsing energy that did something to us. We jumped, shouted, and screamed along. We just couldn’t help it. We knew deep down it was a turning point and there would be no going back. 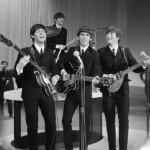 The new #1 song on WABC was by an unknown band that had shown up overnight and left a lasting imprint on our music and culture. This was a group that would help steer the revolution into alternative thinking. They started with a song that echoed the predominant theme of teenage love. Once we were all seduced and under their spell, their themes expanded to include cosmic and brotherly love.

We were about to embark on a culture shift from bobby socks to go-go boots; from button-down collars to Nehru shirts; from conforming to re-forming.

Our guts told us we were on the brink of something, but none of us around the seesaws had a clue what we were about to be swept up in. The new #1 song on WABC was I Want To Hold Your Hand. Beatlemania had arrived. “Happy Days” would soon be traded for “Hippy Days.”

How fitting that my memory of such a pivotal point in time is connected to those seesaws.